In search of tablelands

When I was in Palestine/Israel I watched many a young shepherd weave around the hilly  and treacherous countryside, leading their flock to clean water. Armed Israeli guards stood at a distance, keeping a close eyes on these young Palestinian boys as they cared for their flock. 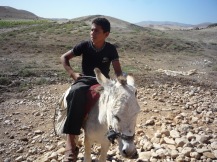 I thought of a story I read many years ago. It takes place during the Palestinian uprising in the 1980s. The Israeli army decided to punish a village near Bethlehem for not paying its taxes which the village claimed, simple financed the occupation.  The officer in command rounded up all of the village animals and placed them in a large barbed-wire pen.  Later in the week a soldier was approached by a woman who begged him to release her flock, arguing that since her husband was dead, the animals were her only source of livelihood.  The solider pointed to the pen containing hundreds of animals laughed and said that even if he wanted to help, it would be impossible because he could not find her animals.  She asked that if she could in fact separate them herself, would he be willing to let her take them?  He agreed.  The soldier opened the gate and the woman’s son produced a small reed flute. He played a simple tune again and again, and soon sheep heads began popping up across the pen.  The young boy continued his music and walked home, followed by his flock of 25 sheep.

The Palestine boys I saw did not have  reed flutes, but I could tell that they had an unbreakable and affectionate relationship with their flock. Psalm 23 came to mind as I watched them guide their sheep to the water, especially the lines, “You prepare a table before me in the presence of my enemies.” This line often gives me pause. I can’t say I completely understand what it means or suggests. Are we eating at this table, and are enemies invited to the table or are they simply present, lurking in the shadows? Or is the psalmist suggesting that despite the enemies, despite the violence and hatred that surrounds our living, a safe place, a gathering place is being prepared. Clean water is being prepared. Peace is being prepared. We need not fear. Instead, we are invited to strain our ears to listen for the way toward safety, the way home.

In a book called A Shepherd’s look at Psalm 23 author Phillip Keller, an East African shepherd, writes vividly about this table. He says that as a shepherd once a year he would lead his flock to the high mountain country of the summer ranges. These are known as tablelands, an area of land much sought after by shepherds. These high flat topped platauxs are referred to as mesas, the Spanish word for tables.

Often these tablelands  are remote and hard to reach, and so the energetic and aggressive sheep owner must take the time and trouble to ready these plateaus for the arrival of sheep. Early in the season, he writes, before the snow has been melted by spring sunshine, the shepherd goes ahead and makes preliminary survey trips into this rough, wild country. It’s looked over with great care, keeping ever in mind its best use for his flock during the coming season.  Watering holes need to be cleared and cleaned from the accumulated debris of leaves, twigs, stones and soil which may have fallen into the water source during the autumn or winter. A supply of salt and minerals is distributed over the range at strategic spots for the benefit of the sheep. The shepherd must check for poisonous weeds. Furthermore, a shepherd must also keep an eye out for predators-signs of wolves, coyotes, and the like. Only the alertness of the shepherd who tends her flock on the tableland in full view of possible enemies can prevent them from falling prey to attack.

You prepare a table before me in the presence of my enemies….

We can probably all think of tablelands that make up our life-those safe landings, those shepherds and flocks or communities who provided for us when we were in need. Many, many people are searching for tablelands. If not clean water, a safe place to learn, grow, and be fully themselves, safe or safer from harm.

Implicit in Psalm 23 is that God our Good Shepherd, or for Christians, Jesus as the Good Shepherd goes ahead of us preparing these tablelands. And as those who seek to follow this Jesus perhaps we will have the strength to do the same. Perhaps we will be among those who remain alert, who seek and prepare and create  tablelands of our own-safe landings for ourselves and those in need.

On Monday of this week I had a younger cousin stay with us. I brought her here to Rainbow to show her around. It was late evening and as we pulled up. There were about 15 or so people in Whitmore park, and there were interviews taking place for our Freedom School program this summer. Psalm 23 was running through my head as I walked her around the building and grounds. Later she asked me what I was going to preach on Sunday and I mentioned this idea of creating or searching for tablelands. We then wondered together if programs like Freedom school or places like the playground were city tablelands of sorts- safes places for children and adults to play, discover, learn, and reflect together.

I invite us to keep this image of a tableland in mind as we now consider two more Psalm 23 adaptations written this week by Linda Shelly and Gail Goeke. Linda is a Court Appointed Special Advocate volunteer who works to provide a safe and permanent home for children in need. Gail recently traveled to TX and provided pro bono legal assistance serving women with children detained in the largest immigrant family detention center in the United States. She considers Psalm 23 from the perspective of a detained woman/mother.

Psalm 23 at the Courthouse by Linda Shelly
The Lord is my shepherd.
He is everyone’s shepherd.
None of us shall be in want.
He reminds me to rely on Him when my heart and those around me, is breaking.
He is right beside and amongst ALL of us.
He will quiet our heads, our hurts, and our hearts.
He does restore our souls to wholeness.
He shows us the path and is willing to redirect us many, many times when we falter.
All of this done in and for His name.
Even though we walk through many messes caused by our own bad choices,
We need not fear evil, for God walks with us and through us.
God’s words and His mercy can and will comfort all of us.
At times one of us has her heart broken apart on the witness stand while others of us
throw words of shame and blame at  her.
God is there – with the one being shamed and those doing the shaming.
God pours his love through all of us in our actions to each other;
in our remembering of, “That could be me on that witness stand.”
My heart overflows.
Surely goodness and mercy will be shown to all of God’s children –
those too young to use their voice
and those whose voice is drowned out by shame and guilt.
And we will ALL dwell in the House of the Lord forever.
And on the days we feel too broken to feel this, this message will be brought to us –
even if only through a squeeze of a hand, a Kleenex offered, and a tear shed out of grace;
Grace for each of us.
Amen.

God, you are my soul’s welcoming lamp, my light in the window.
Your house of rest, solace, and hope beckons.
I shall not despair.
You guide me through the nights of humiliation and desperation,
still haunting my dreams.
You deliver me from the powerful who have no respect for life.
I will no longer submit to their evil demands.
You give me courage to speak.
You give me strength to protect my child.
Feed my children.
Release my shackle.
Gather my loved ones.
Surely I will know justice and mercy,
and I shall dwell in your presence–
Not as a stranger or a guest
But as a child at home.