The first day of summer brought with it a near tree catastrophe in our backyard. Fortunately for us and our neighbors, no permanent damage was done. What does last from that experience, other than a bunch of big logs we don’t know what to do with, is new appreciation for and curiosity about trees.  (This appreciation for trees was only made stronger while listening to Radio Lab’s recent episode on trees.)

I am therefore going to preach a tree-ific sermon this Sunday at Rainbow. And as I prepare, I find myself thinking about another special tree that once stood on the west side of the church. Now the wood from that tree stands in front of the Rainbow Sanctuary as our pulpit.

Here is that story as told by Sculptor Matt Kirby (pictured below in our church shed attic) from Lawrence, KS:

Tree is cut down 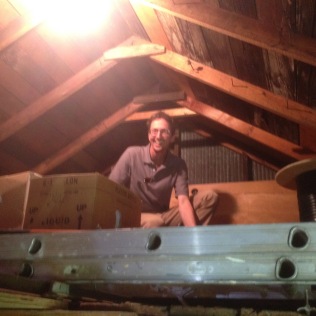 Wood is stored and then found again

“The spalted maple used in the piece was harvested some years ago from a tree standing on the church property. The silver maple had been planted shortly after WWI as a memorial to a fallen soldier from the Methodist congregation which had been the previous owner of the building. 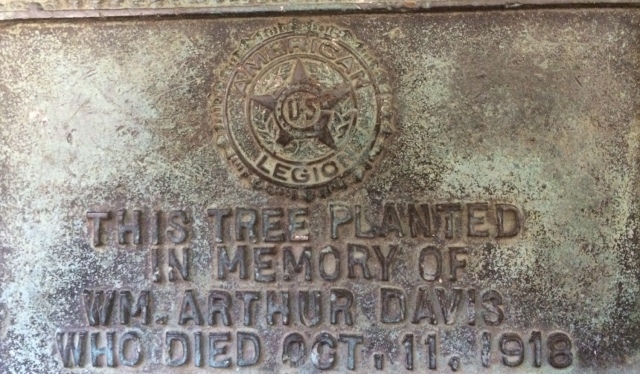 The wood (spalted maple) was a treasure. Spalted means that the tree was in the early
stages of decay. Spalted means there was mold growing in the wood-grain which
produces acidic acid. The wood represents free flowing natural patterns. It’s both chaotic and beautiful. Nature in its productive rage is lovely. 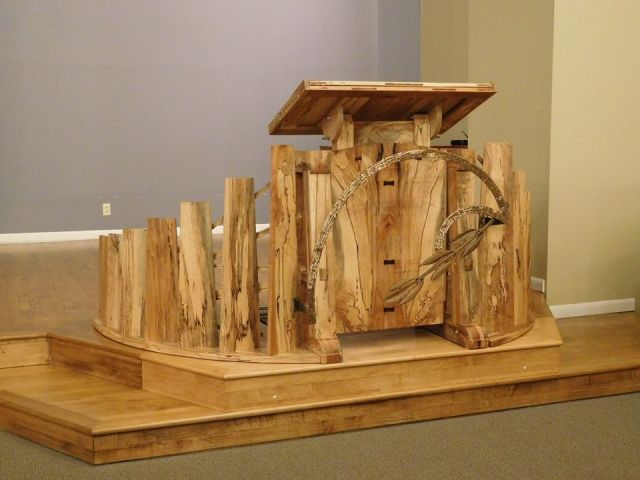 The pulpit is designed so that the speaker has an experience of being in a small grove, basket, or boat, with a sense of contained visibility; that the place of speaking has a sense of holistic purpose about it, somewhat in solitude but presented to the community. The idea was derived partly from “Dendritaes,” ascetics in the early Christian church who would stand on columns for long  periods as demonstration of forebearance to faith. The term means literally “Tree People”. The flanking elements are meant to represent people gathering around a table, a common place of nourishment.

The easel surface slides down to a seated reading level for handicap access. Close up of the center panel, inspired by the work of George Nakashima,with grain chosen and structured for an analogue to ideas of exultance, rising, and emanating forth. The top panels on the easel were chosen with similar intention.The entire easel assembly rides up and down on columns supported on calibrated springs for a neutral weight function. Tilt, height and table slide are fastened by bronze dowels. 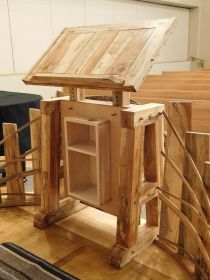 In addition to the spalted maple, fabricated bronze and lignum vitae are used in a representation of a peace dove which appears to hover in front of the pulpit. Seven (leaves) is an irresolvable number, this perfect number that can never be fully
known. It’s infinite. Lignum Vitae in Latin means “Tree of Life.” Lignum is that lig in religion. The fiber, the thing that binds us together. The Lignum Vitae will turn green over time as it oxidizes. 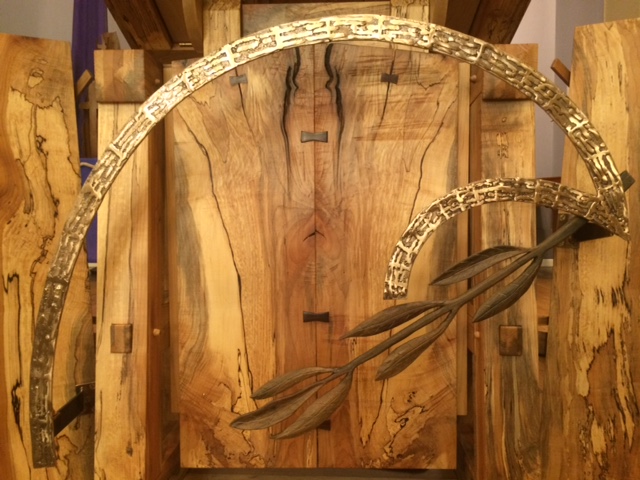 Though the entire piece has lots of glue in it, used to laminate the timber stock for maximum grain figure and interest, the actual joinery is all dry, and pegged to fasten, much like a traditonal timber frame barn. The trunions, easel, support columns and top surface all knock apart from tight, slightly compressed fit, and the top spandrel between the columns is tenon-fitted to almost air-tight dry mortises (which produce a satisfying “pop” when pulled apart!) in order to unify their mechanical function, but eliminate binding due to seasonal expansion.

The first sermon spoken from this new pulpit was by the church’s first pastor Stan Bohn from North Newton, KS who gave some reflections of his work in the Civil Rights Movement, and in particular, leading (with enormous grace and wisdom) an integrated group of young people through various instances of segregation.”