Vocation in the Real World

Today we will wrap up our worship series on Being Mennonite. (Hopefully this doesn’t mean we will wrap up being Mennonite.)  My sermon title for February 26 is “Why Stay?” While I won’t be sharing the following personal experience from the pulpit this morning, it certainly impacts so many of my reasons for staying within the Mennonite Church.

Stranded and exhausted in the middle of a lake is not, I found out the hard way, a good place for a full blown vocational crisis.

My memory, as trustworthy as memories can be, goes like this: I arrived in Minnesota at Collegeville Institute in the summer of 2012, eager to write and learn from one of the spiritual writing greats, Kathleen Norris. This was a sabbatical-activity-dream-come-true to be among ten selected writers from all over the country gathered to learn more about “Theology in the Real World with Kathleen Norris.”

However, during my week at Collegeville I struggled to write much of anything. I was intimidated—wondering if I was a writing imposter. I was also experiencing high-level vocational anxiety. This sabbatical was turning out to be a three-month struggle over whether or not I was well-suited for congregational ministry. I felt (and still feel) bad admitting that given that sabbaticals are usually designed to energize and renew one’s ministry. Instead I was questioning whether congregational work was the best setting for me to live out my sense of Christian vocation.

And so there I was at Collegeville, avoiding my writing assignments for the week and instead, going on long walks and swims. And it was during one such swim that my vocational melt down (aka near drowning accident) occurred. I waded into the lake and I just started to swim, with no particular goal in mind, other than to move my body and try to shake off this growing anxiety. I kept swimming and swimming. Before I knew it, I was half way between shores, with about a mile to go either way. I had to decide what to do—keep going to the other, unknown shore, or turn around. And just like that—I felt this aching, familiar indecision that has plagued me for so long—that parlaying and agonizing tug between wanting to explore new waters (aka vocational paths) and staying put. I had long feared that this tug would eventually tear me in two. I had not imagined this occurring in a lake in Minnesota.

What put me over the top that day, other than feeling physically exhausted, was that when I finally stopped swimming I looked up and on the shore where I began, there stood a large cathedral poking through the trees, looking beautiful and formidable at the same time. 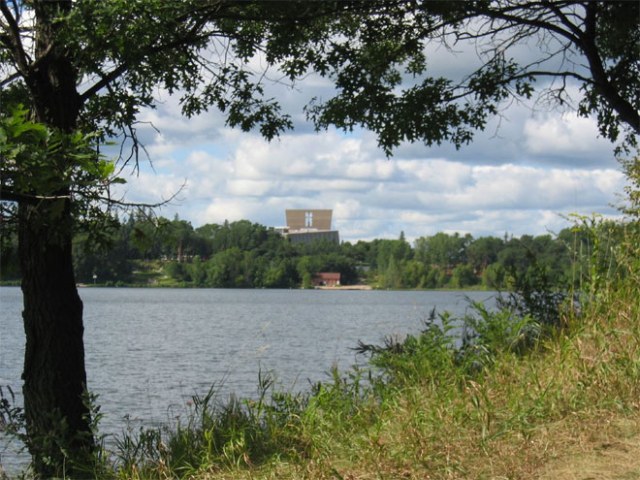 When I heard the church bells ringing, I figured it was best to turn back around and head back, and yet I resisted that because my whole life has been oriented around the church, maybe not a towering steeple, but a sanctuary with the sounds of organ, calls to prayer, and so on. The church has always been a compass for me. And yet that day in the lake, my own self-doubts and my own grievances and disappointments with the Mennonite Church and Christianity in general could not be ignored. I wanted to swim away from, not toward the church.

And yet swimming toward the other, unfamiliar shore felt analogous to leaving my vocation as a pastor. There were only trees and a primitive looking building on the other side. What would I find on the other side in a new vocation? I feared what this choice would mean for me. And so I floated on my back for awhile, tears falling in the lake.

Fortunately one of the lifeguards on duty had seen me go out, and was hovering near the buoys and somehow he sensed I might be in trouble. Before I knew it he was beside me standing on his Tom Sawyer-like raft. Who knows? Maybe he saved a life that day and he didn’t even know it.

Seeing him come toward me allowed me time to catch my breath and stop sobbing. He made sure I was ok, which means I lied and said I was fine. “What’s on the other side of the lake?” I asked. “How about we can find out together? Either way you have the same distance. Your choice.”

So off we went. And when we got to the other shore, sure enough there was this rustic chapel where people go for spiritual retreats. After poking around a bit, I enjoyed a long walk back to campus through the woods of Minnesota, barefoot, alone, cold, and exhausted, but grateful to be alive and strangely content.

During that walk home and many times since then, I’ve thought about all of the people, like that lifeguard, who have offered me a metaphorical life jacket, often coming alongside me at just the right moment when the various tugs threatened to undo me. Something else, more profound happened on that walk home. I kept hearing the lifeguard’s words, “Your choice.” Thanks to his reassurance, I realized that I really did have a choice of whether I stayed or left  congregational ministry, and that if I did indeed leave being a pastor, I would be ok too because people, like this lifeguard, would help me find out what was on the other side.

I ended up not leaving my job as a pastor. Actually, I returned to where I was serving as pastor more energized than ever before, with a new found joy and freedom.  What I left behind in that lake, other than my tears, was a sense of obligation and duty. And what I gained was a new found confidence that I could actually choose this vocational path for no other reason than because I believed it had beautiful potential.

I won’t go so far to say that my swim that summer day was a re-baptism, but it was an experience of reorientation and transformation that has had a profound affect on me, and that keeps me afloat even when so much still threatens to unravel me.

So hats off to you, Collegeville. I knew that eventually, even if five years later, this writing conference would inspire at least one written reflection. More importantly, it helped launch me into another five years (and counting!) of pastoral ministry. I’m still afloat, thrashing around now and then, but looking forward to another five. Lifeguards everywhere, beware.

Recently I was asked in an interview if I had “any advice to offer other women who are maybe feeling a call to ministry, or maybe women who just in general are feeling a call to a professional role that maybe has not always been filled by women. What  might you offer to them, or what might you want people to know about the position you have and what it has been for you? ”

Here was my response from the transcript:

Ruth: Well, I certainly am very mindful of who might come after me. And as I look out into the congregation and especially see the young girls I – yeah, I just hope whatever I do would, at least – at the very minimum, cause both (whatever your gender) that permission to see what I’m doing as a possibility for them, someday – you know? So what advice, is that the question?

Ruth: I think finding, sort of a sense of purpose, or fulfillment – finding your place in terms of any kind of job or vocation or calling – it’s really hard. And I’ve taken many many long walks. I’ve cried many tears…But that’s all been worth it. And so I guess that I just want to trust that people will find their sense of purpose or call, whether it’s in the church or not, someway and have the experience of feeling a lot of joy in what they do. But it’s not easy. And a lot of times we all will feel intimidated and scared and ill-equipped, but part of what I think I’ve learned over time is to just keep showing up, keep learning as much as you can, bouncing back from mistakes, not hiding in shame, and just – I don’t know – showing up is really key to a lot of things.

3 Responses to Vocation in the Real World